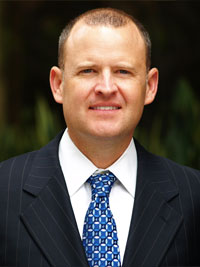 Stewart focuses his practice on strategically representing individuals and companies in business disputes and real estate matters, coordinating responses to federal investigations and subpoenas, and defending clients against federal and state criminal charges.  He is also an aggressive advocate for spouses he represents in divorce and child custody proceedings.

Stewart is an accomplished trial attorney, having completed over 70 criminal and civil trials to verdict.  Clients, judges, and opposing counsel alike praise his trial skills and his results.  Stewart credits his courtroom success to his thorough preparation and his ability to strategize each case’s key issues to his client’s advantage.

Stewart began his career as a Deputy District Attorney in the Los Angeles County District Attorney’s Office.  He served the Los Angeles community as a member of that office for 11 years.  During that time, he prosecuted gang-related crimes as part of the Hardcore Gang Division, one of the office’s prestigious trial assignments.  He achieved success in special circumstance murder and attempted murder cases, and prosecuted defendants charged with a wide range of serious and violent felony crimes.  Stewart was recognized by the Association of Deputy District Attorneys for his outstanding accomplishments in that division.  Stewart also worked in the Major Narcotics Division where he partnered with law enforcement officers from numerous state and federal agencies to coordinate investigations of Mexican-based drug cartels.

After leaving the District Attorney’s office, Stewart worked for a downtown Los Angeles boutique law firm where he utilized his trial skills to represent clients in white collar criminal defense and business litigation matters in both state and federal courts.  He established Yacoubian & Powell LLP in 2010.

Stewart received his Bachelor of Arts in Legal Studies from Chapman University, where he played on the varsity volleyball and club golf teams.  He earned his Juris Doctor from Southwestern University School of Law.  He was a member of the Trial Advocacy team and earned the American Jurisprudence Book Award in Sentencing and Post-Conviction Practice.

* Defended employees of an international company investigated by OSHA and the Environmental Crimes Unit of the Yolo County District Attorney’s Office related to a release of anhydrous ammonia from one of its industrial plants, against claims of criminal nuisance (Penal Code §370) and dumping hazardous waste on the property of another (Penal Code §374.8), and civil penalties.  No charges were filed against our clients;

* Defended owners of a construction company charged by the Orange County District Attorney’s Office with the theft of employees’ wages for failing to pay the full prevailing wage on public works projects, and negotiated a reasonable case settlement and restitution to all victims;

* Defended the foreman on a construction project who was issued a personal misdemeanor citation for failure to prevent stormwater drainage onto public roads in violation of a city’s municipal code.  The City Attorney ultimately dismissed all charges against our client.

* Defended a citizen of Russia charged in the United States for weapons export license violations.  Negotiated resolution of the matter with the United States Attorney’s Office and ICE which allowed for our client’s speedy return to his home country.

* Represented company in response to federal Grand Jury subpoena and ongoing investigation of fraud against the Small Business Association.

*  Assist private company with investigation of employee theft of over 35 million dollars and reporting same to federal law enforcement agencies, which led to criminal charges filed against the former employee.

*  Represented numerous clients charged with DUI, drug, assault, and other felony and misdemeanor violations in State Courts throughout California.

* Represented an individual against his partner after learning that his partner was funneling money from their company for purposes of building his own house. We brought an action for equitable partition and contribution.  This case was litigated at a bench trial in Chatsworth and we successfully obtained a judgment of over one million dollars.

* Represented buyers of a residential property in Silver Lake after the seller attempted to back out of the contract.  After failing to honor the contract, we helped our client sue the seller for specific performance. We were successful at trial and our clients received the house and seller was ordered to pay their attorneys’ fees.

* Represented an individual investor who was asked to invest in a new hydrogen fuel company for race cars.  Unbeknownst to our client, the founder of the company was using all our client’s funds solely for his personal benefit. We sued the company and the owner for fraud and breach of contract and were able to successfully obtain a judgment in excess of $400,000.

* Represented a doctor against a medical device company for failure to develop his product.  The company breached the agreement by never paying the required royalties nor did it properly market or develop the product. After filing a lawsuit for breach of contract, fraud by intentional misrepresentation and fraud by negligent misrepresentation, we successfully obtained a settlement that resulted in favor of our client for more than $400,000.

*  In addition, Stewart’s represents spouses in dissolution proceedings and child custody disputes.  He also has represented Trustees and beneficiaries alike in trust litigation in Probate Court.